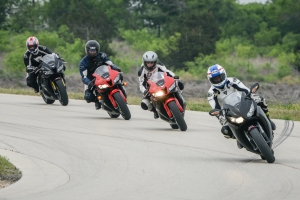 Unfortunately, not everyone who rides gets the opportunity to be taught a valuable lesson, such as WEAR YOUR GEAR, until it is too late. You are required to have a license and pass a test and/or formal training to operate a motorcycle, but you need absolutely nothing to jump on the back. States that have laws that allow passengers to ride without helmets make me cringe…  Riders that allow their passengers to ride without helmets make me angry. Not to put all passengers in a box (don’t worry, I was once in said box), but it’s usually the younger girls who don’t know any better and jump on the back wearing only flip flops and skirts. However, females who ride their own bikes are just as guilty, and I have personally seen 20 year veterans riding without helmets. Sadly enough, most of them really DON’T know just how likely it is for them to lose their skin, their limbs, or even their lives. There are enough riders out there who don’t realize the consequences of going down with an unprotected passenger and I hate to imagine being responsible for someone else’s life without ever having regarded their safety. It happens too often and it won’t stop until a big change is made.

Therefore, WE, as riders, are responsible for setting the example, no… the STANDARD all over the world.

Ladies: When you see a cute pink jacket and matching helmet riding down the street, even if you don’t like pink, you smile, because you know the girl under the gear is smart enough to protect herself. When girls who don’t ride their own bikes or don’t usually wear protection see how cute you can actually be in gear, or how badass a full black ensemble makes a chick rider look, they want to do it too. They want the pink and purple jacket and helmets, the matching gloves, the sexy riding pants or chaps, and the cool high heeled boots they make specifically for riding. People will usually do what the majority is doing, especially females. If enough of us lady riders wear our gear EVERY TIME we ride, we will have set the standard. Suddenly we will find ourselves seeing less and less bikini tops and skirts on the back of motorcycles and more and more helmets and jackets. We might even be able to get a few off the back and onto their own bikes… what a concept!

Guys: The same goes for you.  Think of the last time one of your friends didn’t jump at the opportunity to look like a badass.  What would you do if everyone you rode with wore all their gear every time they went riding and insisted that you do the same?  The truth is, guys follow the trend just as much as females and if a mass of riders are covering up, then it will only cause more guys to want to gear up. Catch my drift?  By saving yourself, you could be saving a friend.

Safe riding to everyone this week and have fun! We are all in this together, but everyone has the chance to be a hero, not just the ones who have fallen. Remember that YOU are the example, YOU have the opportunity to make a change in someone’s life…. rock the gear and YOUR example will be followed!